Email: This email address is being protected from spambots. You need JavaScript enabled to view it.

We are one of ten overseas campusses run by the Bing Overseas Studies Program of Stanford University. Stanford in Berlin hosts Stanford students of all majors. Students come to Berlin for periods of 3-9 months of study and optional, subsequent internships. Coursework spans a broad array of disciplines: from Berlin's avant garde theatre scene to the political economy of Germany in the new Europe, from film studies to Berlin's rich art collections and architecture of transformation, from intensive beginning German to advanced skill honing in selected academic courses taught in German. New technologies and local tutoring allow students of engineering to stay in sequence with required major coursework while studying in Berlin.

All courses at Stanford in Berlin are an integral part of the Stanford University curriculum in Palo Alto — but the innovative modes and venues of learning developed here, our use of the metropolis and its stellar institutions as the classroom, make for a concrete and intensely interactive learning experience. Cost-free transportation passes, frequent extracurricular activities — H.G. Will Trips to new and prospective member states of the European Union, events with students at local universities, concert and opera visits, festive meals — and heavy subsidy of cultural events attended by students on their own, provide students the entire spectrum of opportunities of this great European metropolis.

After their studies at Stanford in Berlin, the majority of our students enter internships throughout Germany under the auspices of the Krupp Internship Program for Stanford Students in Germany, a program designed exclusively for students of Stanford in Berlin. The generous support of the Alfried Krupp von Bohlen und Halbach- has since 1982 made it possible for the program to place over 1,250 Stanford students in full-time, paid internships, giving them both practical experience in their fields and close contact with Germans in the workplace.

Over 550 host institutions have provided Stanford students a full spectrum of opportunities in a vast variety of fields: from artificial intelligence to medical research, from banking to forestry, from theater to engineering. During their studies at Stanford in Berlin, Internship Coordinator Wolf Junghanns works closely with the students to help them focus their interests, to finalize an appropriate placement, and to prepare them for entering the German workplace. Internship work permits are provided through the generous cooperation of the DAAD, and students receive a stipend sufficient to cover all of their local costs. Students who intern spend between six and nine months in Germany in a combination of study and work. 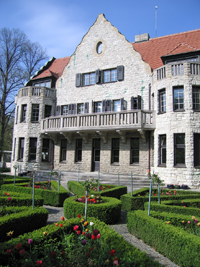 Stanford in Berlin is not only a place where history is taught - it is itself a historical site. Stanford’s Berlin home is a villa designed by architect Hermann Muthesius. It is located in the Berlin district of Dahlem not far away from the Free University and neighboring the guesthouse of the German foreign minister.

Haus Cramer and its gardens are registered as an historical architectural site under the name of the family that built the house in 1912. In 1933, shortly after the Nazis came to power, the family emigrated to the U.S. The villa was largely destroyed by a gas explosion in the 1950s and stood in ruins for many years. Thanks to the architectural historian Julius Posener, the house was not razed in the mid-1970s as planned, but was rebuilt by the Senate of West Berlin for use as Stanford's campus in Berlin.

In 1988, 1996, and 2002, donations by the Stiftung Deutsche Klassenlotterie Berlin and The Stanford Club of Germany allowed for a historically-accurate restoration and modernization of Haus Cramer under the direction of Berlin architect Burckhardt Fischer.  In 1988 the history of the villa came full circle when Charlotte Cramer of New York donated a 1928 painting by Leo von Koenig to Stanford in Berlin from the estate of her parents - a beautiful portrait of her from the time when she lived in the house.

The generosity and vision of Berlin alumnus Hans George Will and of Stanford President Prof. Gerhard Casper enabled the University to purchaseHaus Cramer from the city of Berlin in the year 2000. It is the first property the University owns outside the United States. In 2005, the Berlin Will Foundation provided funding to build a multi-purpose sports court in the portion of the garden that had once been a tennis court.